Larger Fuel Injectors | How do I know if I have the right size? 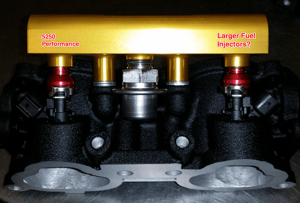 Horsepower. We all love it and want more of it.

Do I need Larger Injectors | If you are ready for more, choosing the right stuff is critical for increased power and reliability.

Larger Fuel Injectors | A combustion engine makes power by mixing fuel with air and igniting it. The bang of ignition is what pushes the piston down or the rotor around. To get bigger bangs, we need more air. We then need to match a precise amount of fuel to that air and this is the job of the fuel injectors.

Fuel injectors don't always get the attention they deserve. They are actually responsible for how smoothly an engine operates and it's ultimate maximum power output.

A 800 hp engine requires a massive amount of fuel and its number of cylinders will dictate how large of fuel injectors you need. A 10 cylinder motor with the same 800 hp requires less than half the fuel per cylinder than a 4 cylinder engine of the same output.

This means that the fuel injectors in a high power 4 cylinder engine must be sized appropriately than the injectors of a larger motor.

The basic principle of how fuel injectors works is simple. There is a hole with a stopper in it. When the stopper is lifted / opened via electronic signal, the hole is unblocked and fuel can flow through. 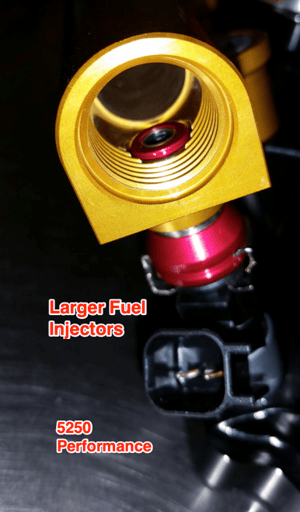 When the stopper is lowered, the hole is plugged. The larger the diameter, the more fuel an injector can deliver. As fuel injector size increases, there are some unwanted side effects.

As an injector's hole gets bigger, the minimum amount of fuel it can flow also gets larger. This becomes an issue when the smallest amount of fuel is more than what is required at idle or cruising. In this situation, the air-to-fuel ratio will become too high and the engine will run rich.

Too rich and there will be noticeable drivability issues. The idle could be rough and stumble, even misfire to the point of setting off the check engine light. In some cases, poor fuel economy will be noticed from running overly rich all the time.

This is the dilemma of choosing fuel injectors. You want to pick injectors large enough to support power goals, but not so large that the vehicle becomes unpleasant to drive. If you have very high power goals, like doubling or tripling the stock output, you may not have a good option.

There are ways around these issues, like staged injection with a smaller injector for low load and larger injector for higher loads, but these require custom intake manifolds and aftermarket engine computers that will add thousands of dollars to your build. You have to pay to play.