Do I need an Air Oil Separator? What if I have a Catch Can? Here is the real world difference

Performance Cars | Air oil separators and catch cans. They do basically the same thing, or do they?

A recent post by a popular YouTuber got me thinking about these devices. Let’s put some real world experience on this topic.

While it is true that catch cans can help your engine and some cans are better than others.

Oil vapors can cause extreme carbon deposits and buildup on the backs of the intake valves. The example vehicle used to highlight catch cans uses is a direct injection motor, that represents a whole different set of issues.

If you follow our blogs, you know how quickly a direct injection engine can become carbon fouled. The only way to clean this is to remove the intake manifold and manually clean the valves or have them walnut blasted. Chemical cleaning does NOT work once the buildup becomes significant.

True that a catch can will collect all this residue and prevent it from collecting on the valves, there is a better way, the Air Oil Separator. Today’s AOS products are vastly superior in how they are able to do just what the name says. 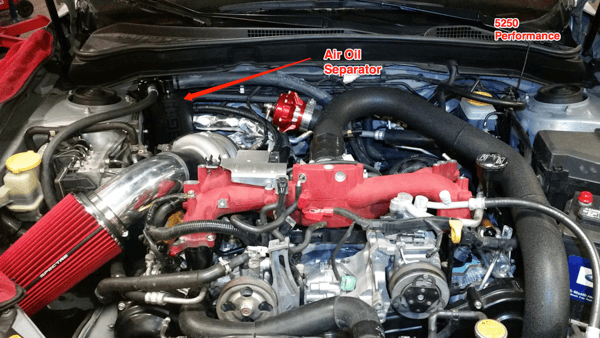 An Air Oil Separator (AOS) or a Catch Can is intended to intercept oil vapors traveling through your PCV system and collect the oil residue. For this, both devices work exactly the same with different results.

Some type of baffling or filters are used to encourage the oil vapor and oil droplets to fall out of suspension and stay in the device while the air is allowed to pass through.

An AOS is a far superior device to a Catch Can. AOS's are designed to return the collected fluid back to the engine. This means you never have to empty it. Keep reading, it gets better.

The large volume of fluid often found in a catch can is due to 2 reasons; capacity and condensation. Catch Cans often have a very large storage capacity so that they do not need to be emptied as frequently. This large capacity works against the system as it encourages condensation within the catch can.

On a cold morning, the catch can will stay cold for a very long time, especially if it is mostly full of cold water. The warm vapors coming out of the engine quickly condense inside the Catch Can, filling it with mostly water. The more full a catch can is, the more water it will collect. I've seen Catch Cans fill up with water in only a few minutes of engine operation under the right conditions.

The AOS is constantly draining back into the oil pan. Condensation does occur, but is never allowed to pool into large volumes. The small amount of water being returned to the motor burns off under normal operation and would normally be directed back into the engine through the PCV system.

Most high quality AOS's also have a heater built in. This is usually an engine coolant line that runs through the main body of the AOS. By keeping the AOS body hot, condensation is prevented, collected water is evaporated, and oil flows freely, allowing the device to work better at separating out oil.

So while this YouTuber had the right idea, he had the wrong product. If you have a direct injection engine, you should have an AOS. When you go bigger on horsepower, you should have a quality AOS. Even if your vehicle is otherwise stock, and AOS can greatly improve performance and economy over time.

They work well when installed correctly, it's the right product for your engine.